Ginkgo biloba is one of the oldest living tree species and its leaves are among the most extensively studied botanicals in use today.

More than 40 components isolated from the ginkgo tree have been identified, but only two are believed to be responsible for the herb’s beneficial effects in humans.

The two types of chemicals are flavenoids and terpenoids.

Flavenoids, such as quercetin and rutin, have potent antioxidant effects. Antioxidants are substances that scavenge free radicals which are damaging compounds in the body that alter cell membranes, tamper with DNA and even cause cell death. Free radicals occur naturally in the body, but environmental toxins including ultraviolet light, radiation, cigarette smoke and air pollution can also increase the number of these damaging particles. Free radicals are believed to contribute to a number of health problems like heart disease, cancer, Alzheimer’s disease and other forms of dementia. 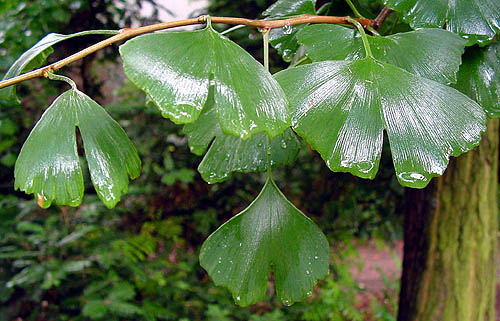 Antioxidants such as those found in ginkgo can neutralize free radicals and may reduce or even help prevent some of the damage they cause.
Laboratory and animal studies have shown that flavenoids protect the nerves, heart muscle, blood vessels and the retina from damage.
Terpenoids, like ginkgolides, improve blood flow by dilating blood vessels and reducing the stickiness of platelets.

Based on studies conducted in laboratories, animals and humans, many health care professionals may recommend ginkgo for the following health problems:

Many studies have found that ginkgo may be as effective as leading AD medications in delaying the symptoms of dementia in people with this debilitating condition. In addition, gingko is sometimes used preventively because it may delay the onset of AD in someone who is at risk for this type of dementia.

Because ginkgo is reported to improve blood flow, this herb has been studied in people with intermittent claudication (pain caused by inadequate blood flow to the legs). An analysis of eight published studies revealed that people taking ginkgo tend to walk roughly 34 meters farther than those taking a placebo. In fact, ginkgo has been shown to be as effective as a leading medication in improving pain-free walking distance. However, regular walking exercise is most beneficial in improving walking distance.

A clinical study found that ginkgo may reduce the side effects of menopause as well as risk factors for osteoporosis and cardiovascular disease. Women are becoming more reluctant to use pharmaceutical hormone replacement therapy (HRT) due to its undesirable side effects, such as irregular bleeding and an increased risk of breast cancer. Several human studies have reported that ginkgo has estrogenic activity and might be suitable as an alternative to hormone replacement therapy.
Ginkgo was also reported to significantly improve functional measures such as coordination, energy level, strength, mental performance, mood and sensation in 22 individuals with multiple sclerosis (MS).

Yurtland’s velvet antler with ginkgo biloba combines all the health benefits of 100% pure velvet antler and ginkgo biloba. The uses of herbs and velvet antler are an ancient, all natural approach to strengthen the body and remedy certain ailments. Generally these products are very safe and well tolerated by most individuals.

However, before taking any supplement containing ginkgo biloba, people on prescription medications or persons who take over-the-counter anticoagulants (Aspirin or Advil for example) on a regular basis, are advised to consult with a qualified health care provider to avoid possible drug interactions.

This formula is produced to help the metabolism resist tiredness and stress. It also maintains the equilibrium of the body's two vital forces: yin and yang. In Traditional Chinese Medicine, Velvet Antler is at the peak of the yang scale; hot, more hormonal and stimulating. On the other hand, the North American Ginseng is more yin; cold, refreshing and less stimulating. Hence, this formula balances the energy within the body. North American Ginseng and pure whole Velvet Antler are two adaptogenic substances, which means that they tend to correct anything not in equilibrium, enabling the body to normalize its functions. This combination will also help to cope with everyday stresses, including chemical agents from pollution. And this formula can also be useful for different health problems, including emotional and physical tiredness, overstrain, exhaustion, menstrual symptoms, irritability, high cholesterol, decreased libido, stress and chronic tiredness.